The 2020 WindStar Primary Election Planning Guide continues our commitment to provide clients accurate and timely guidance for navigating the media marketplace during the 2020 political seasons. 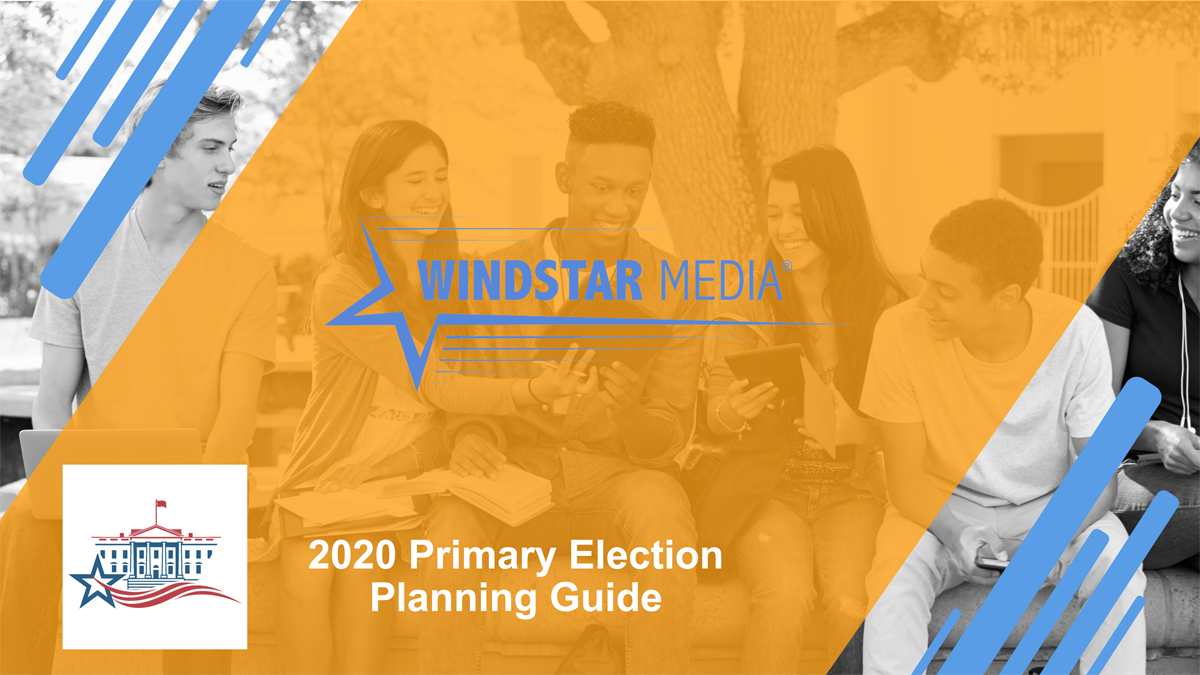 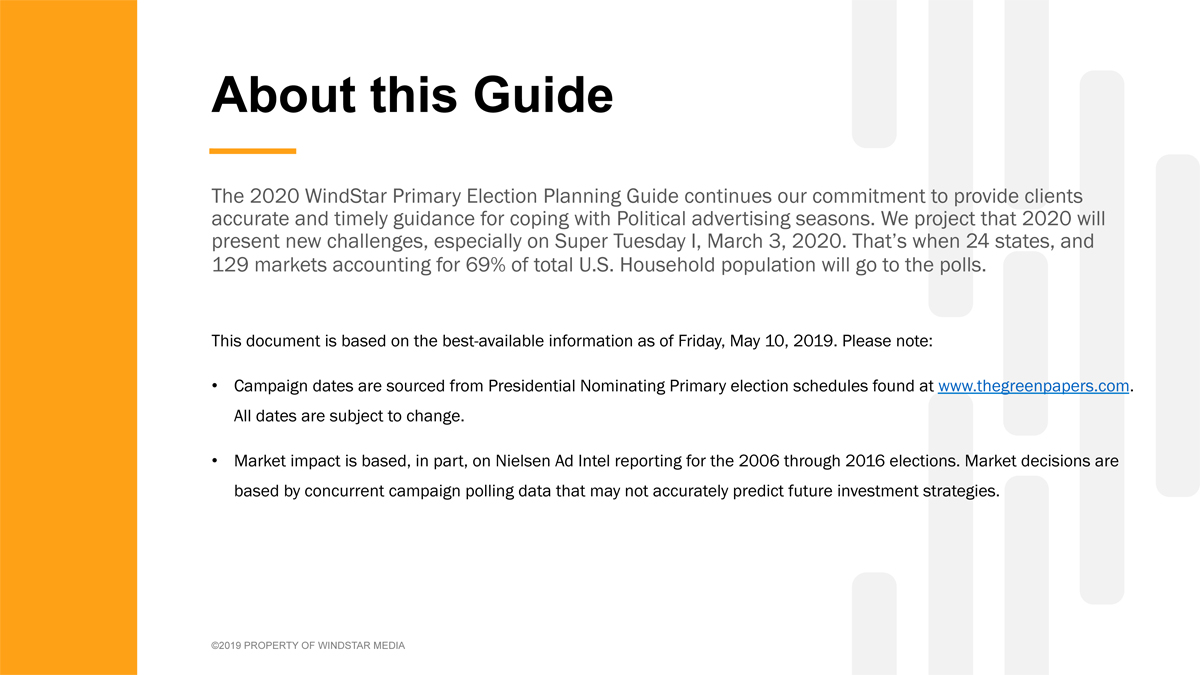 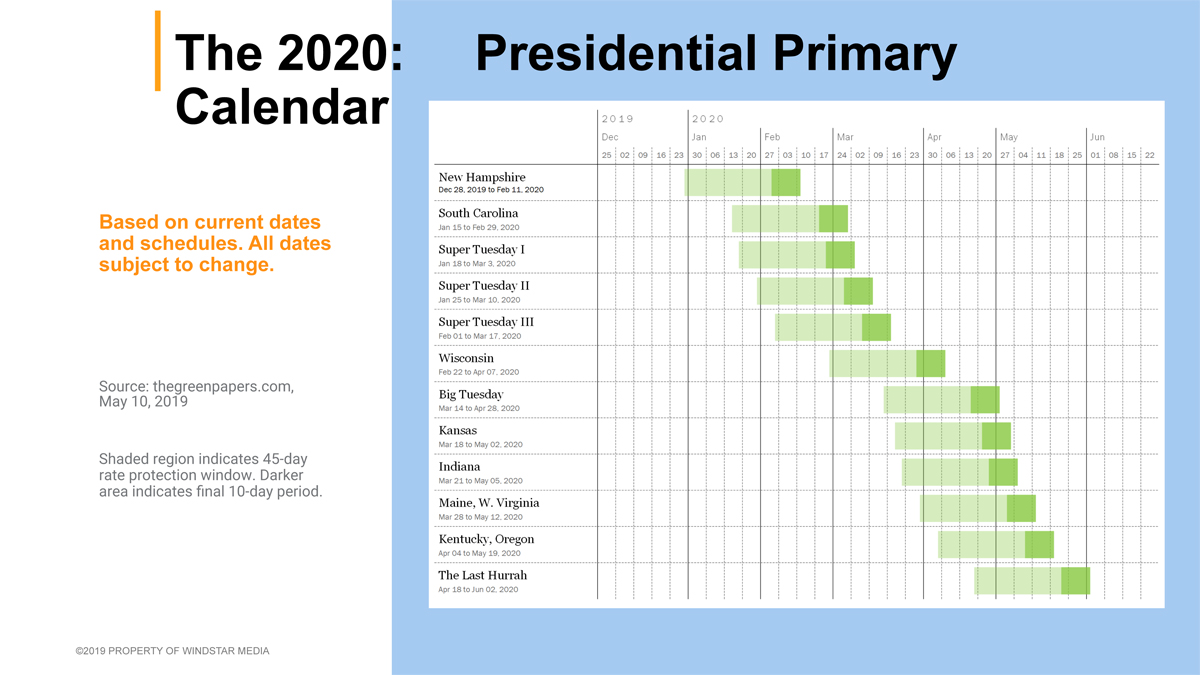 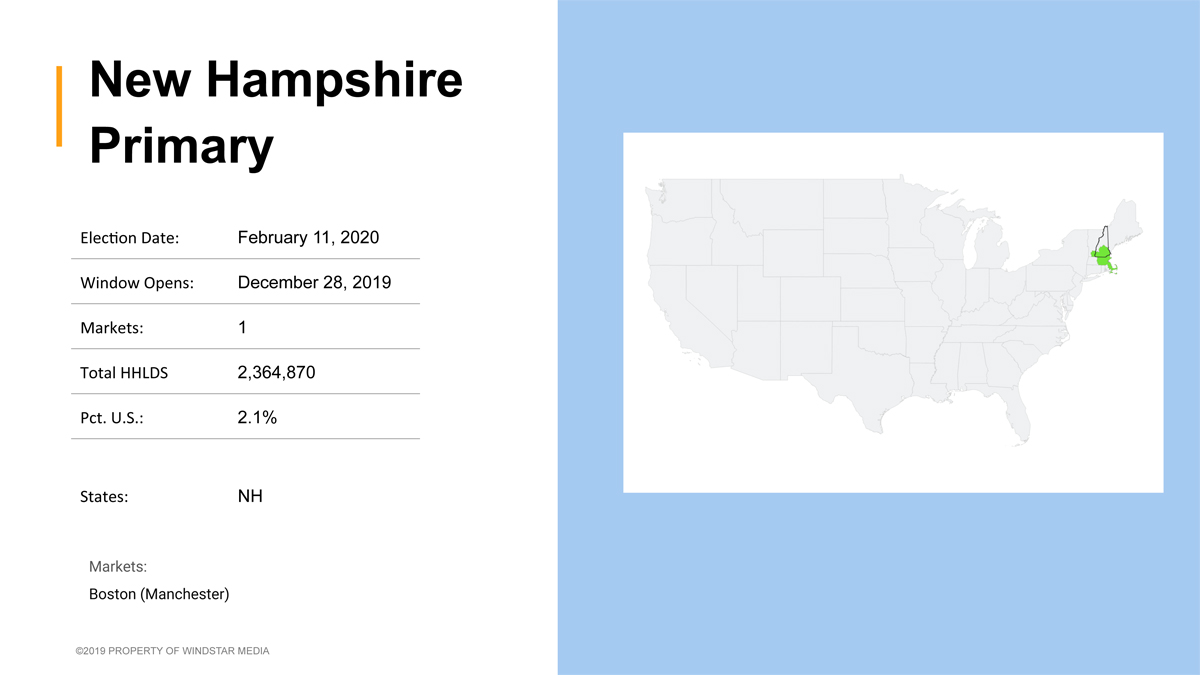 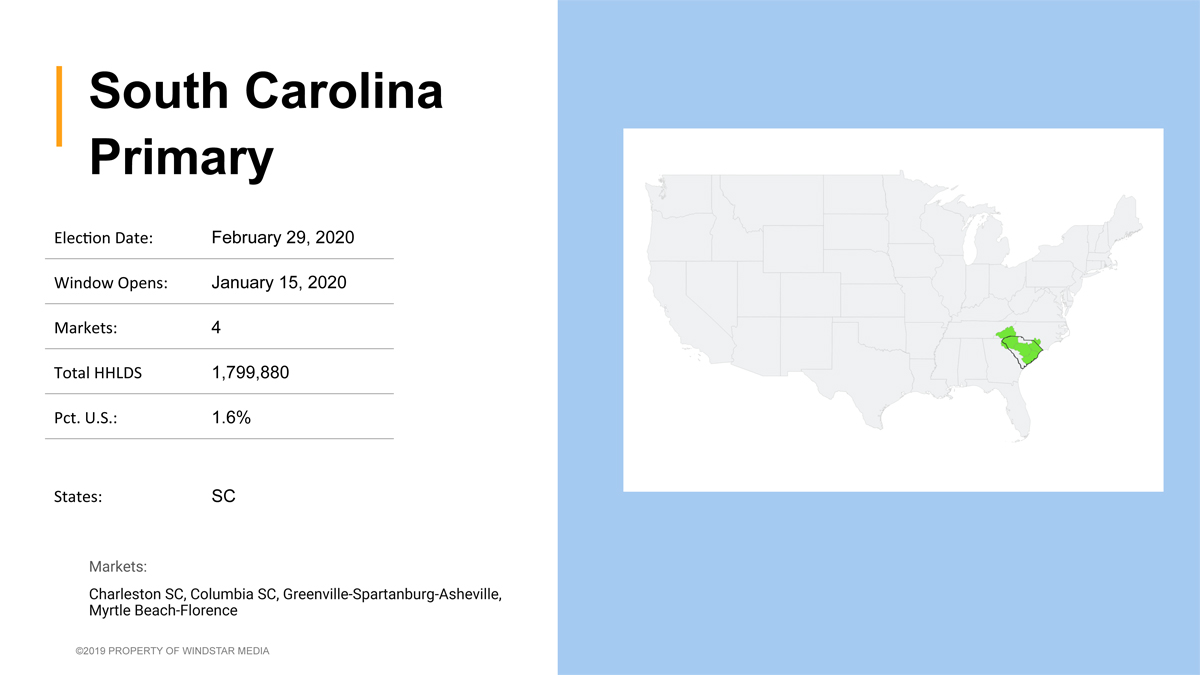 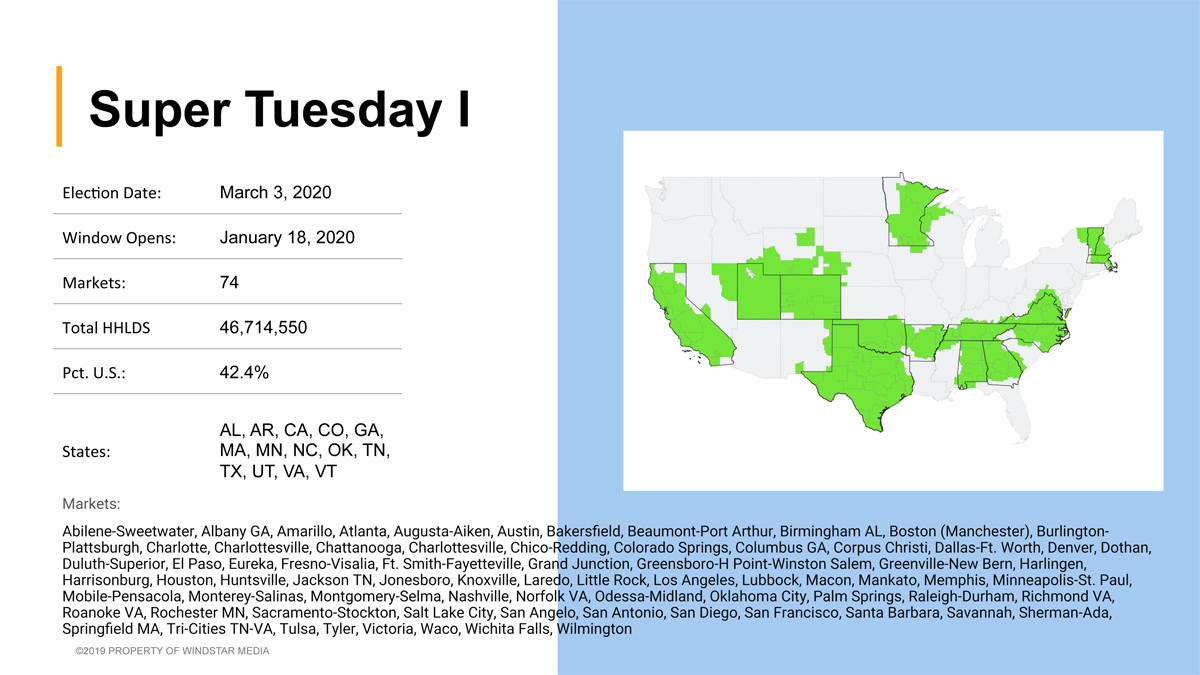 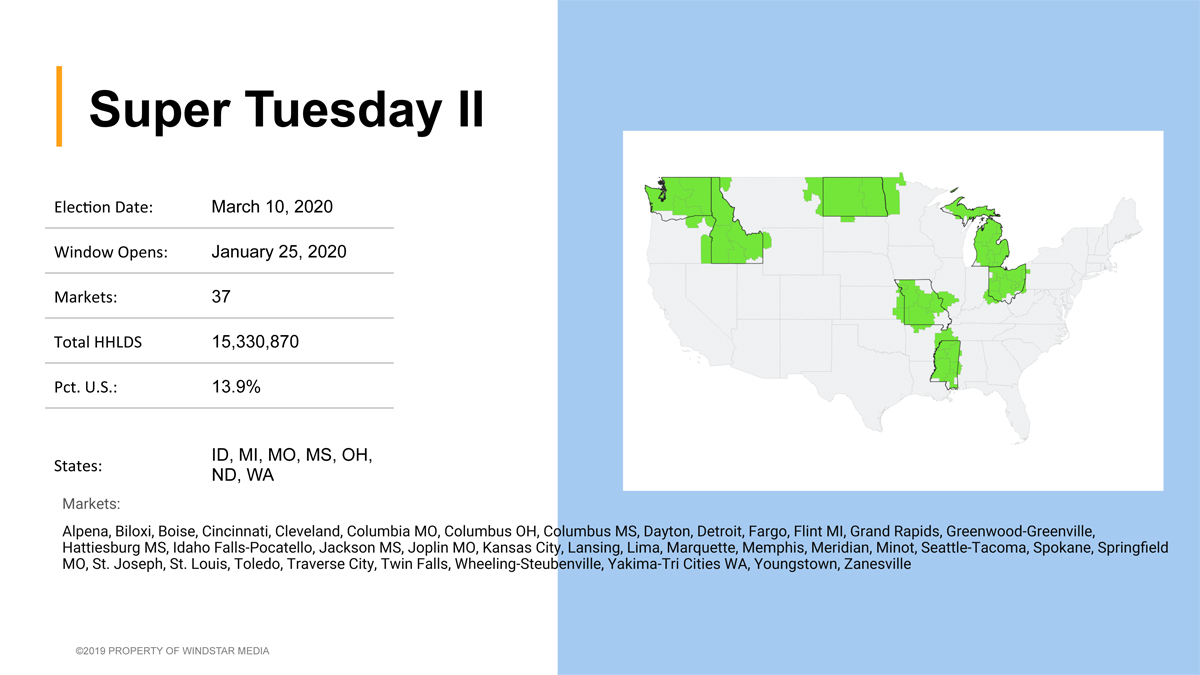 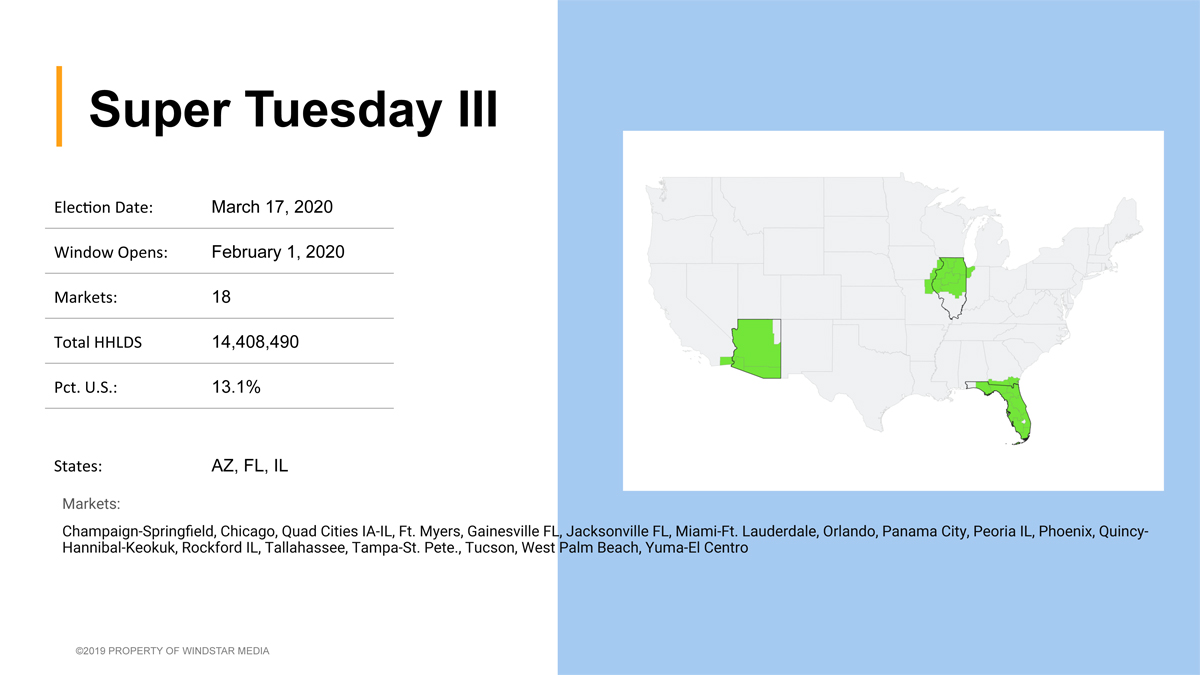 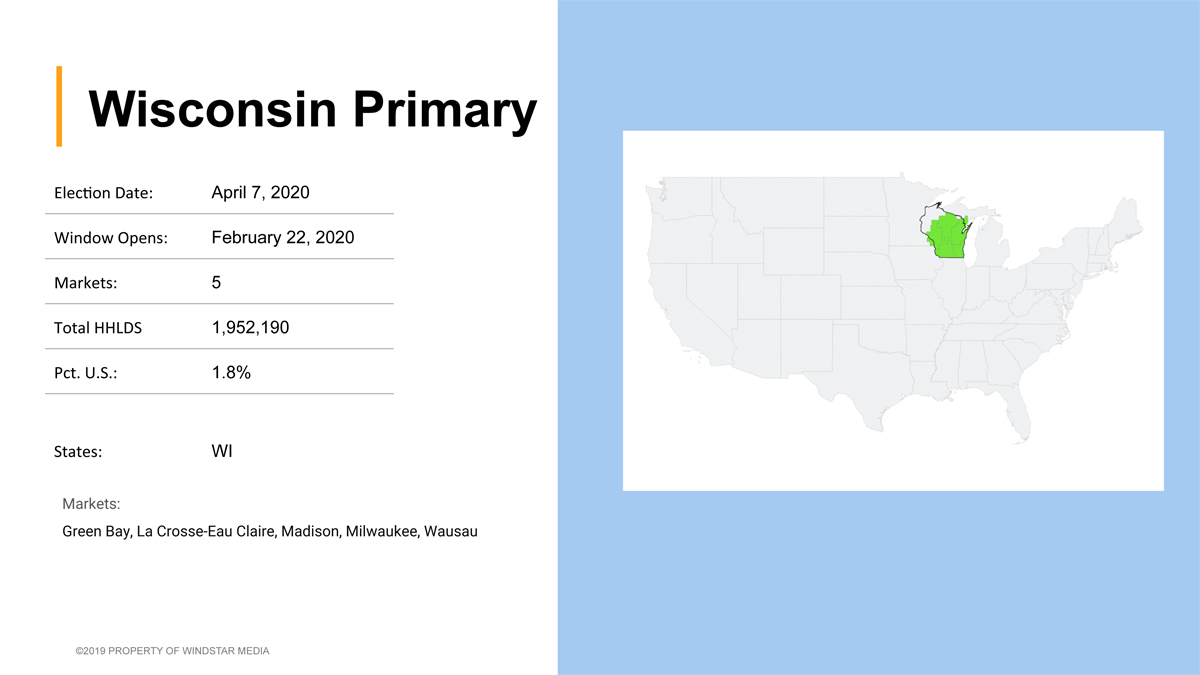 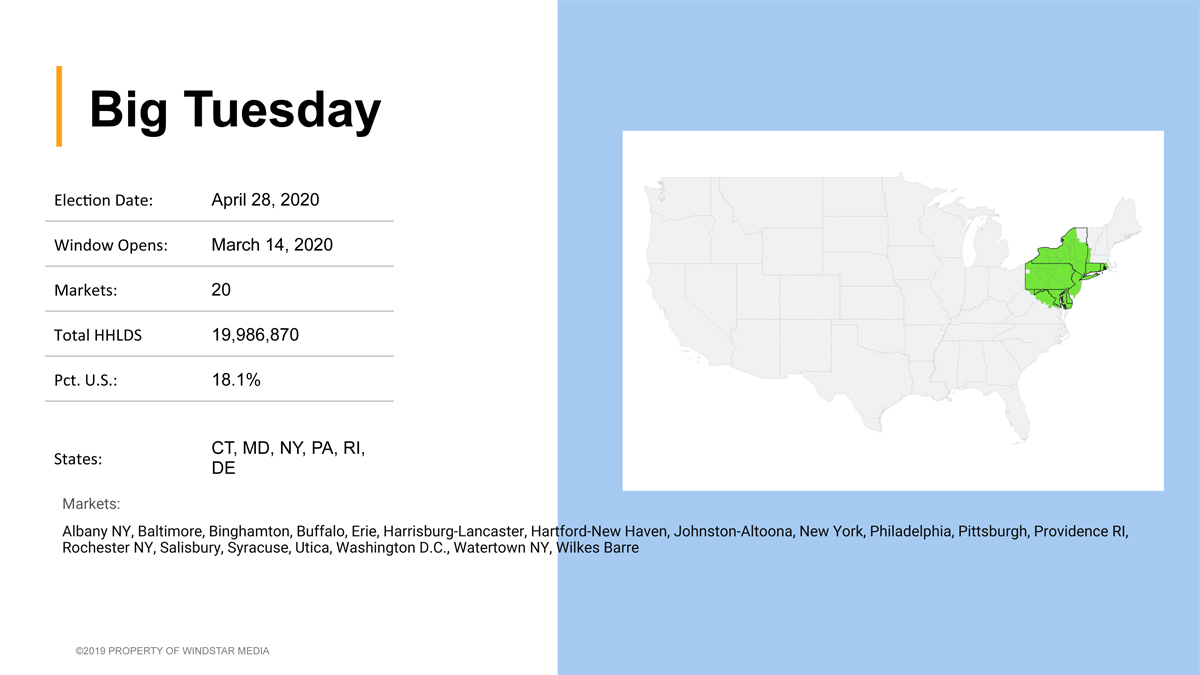 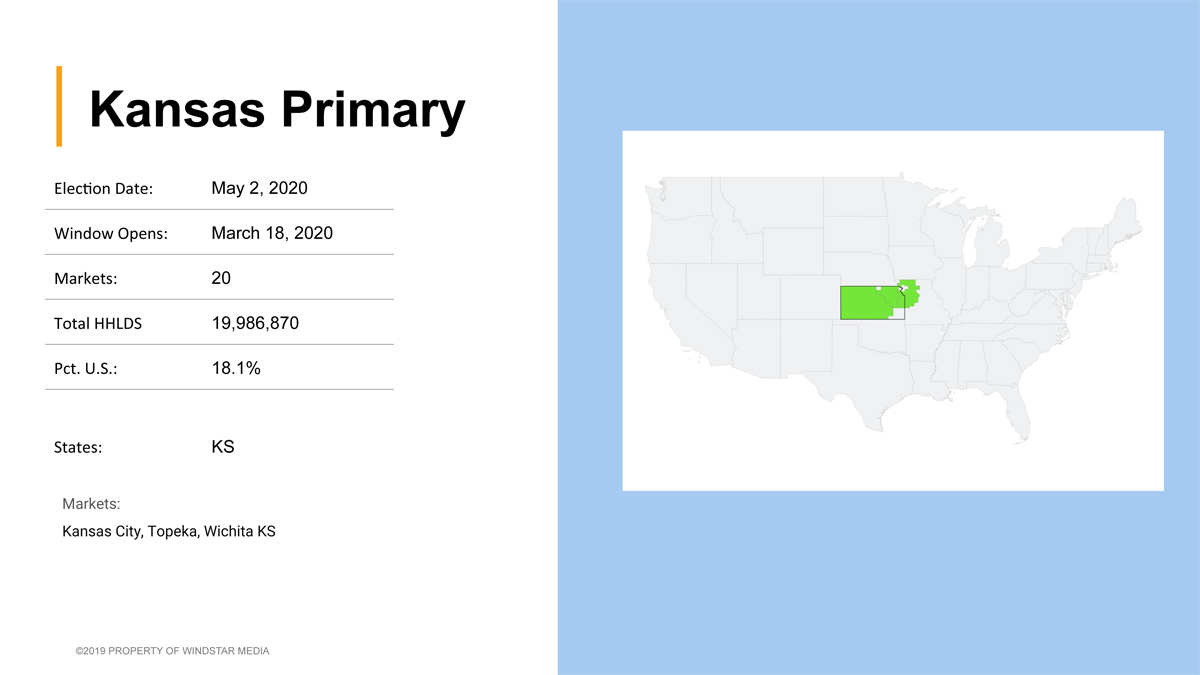 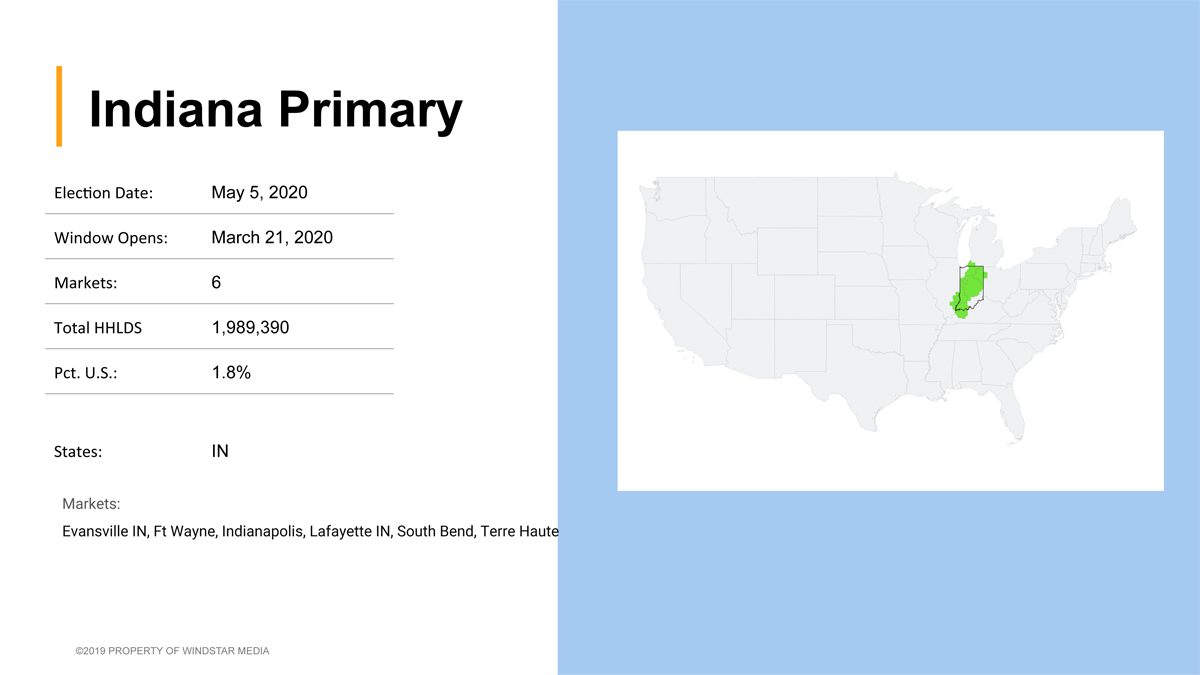 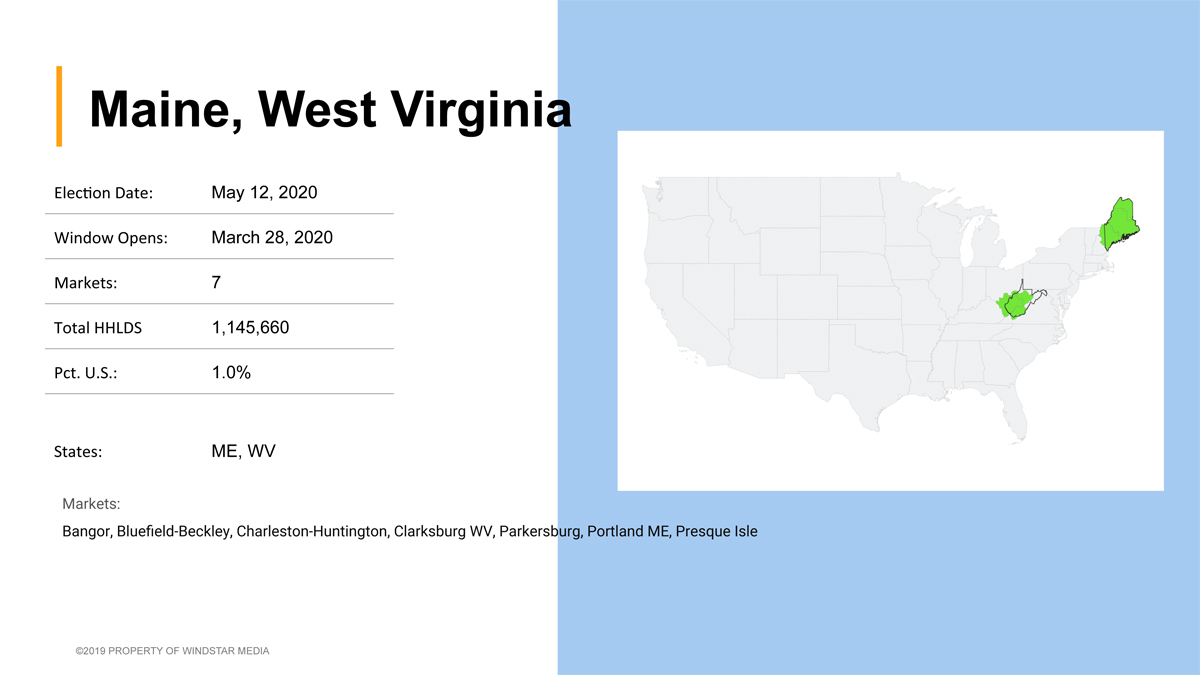 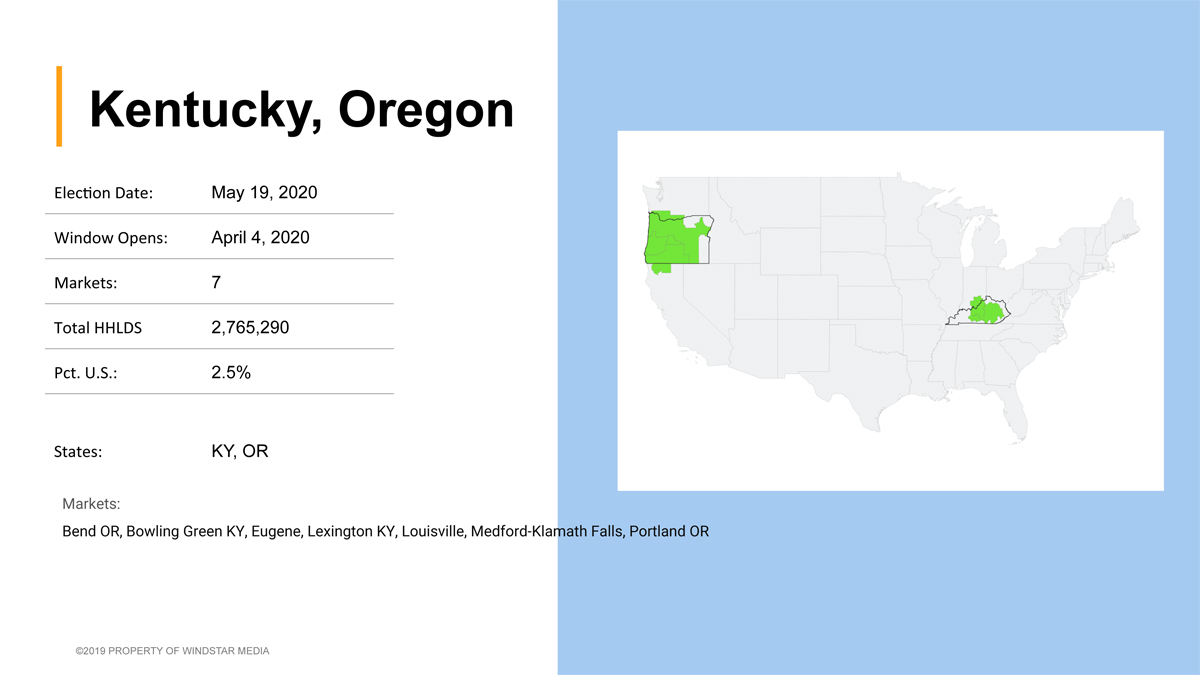 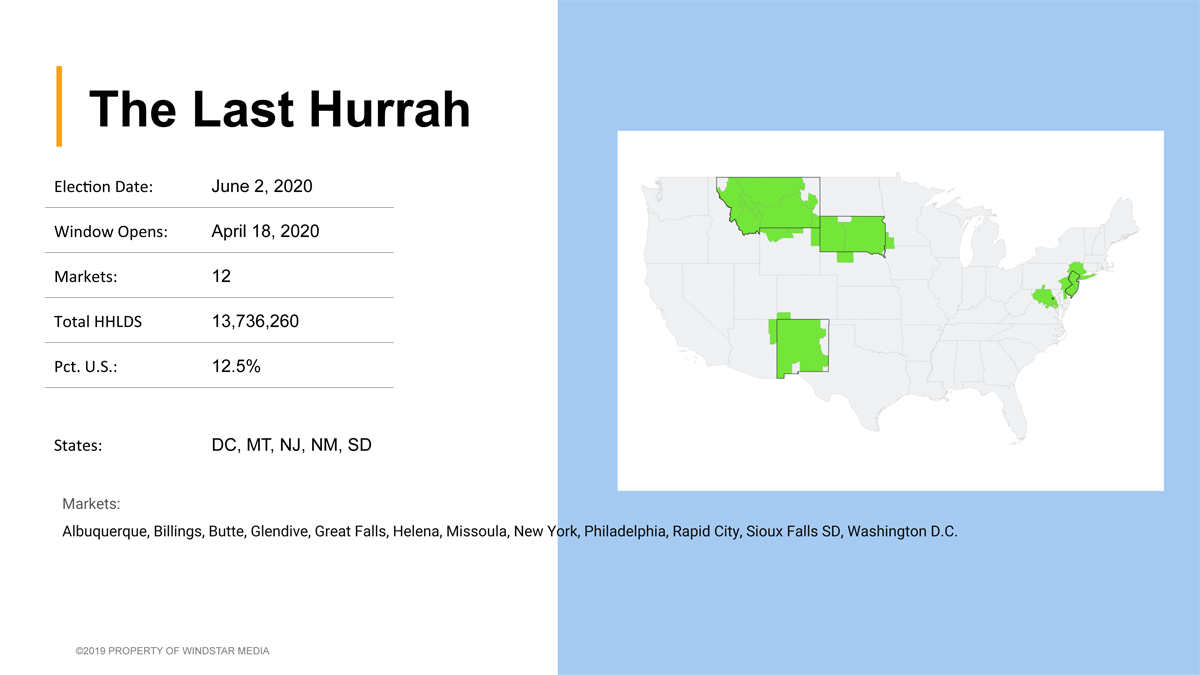 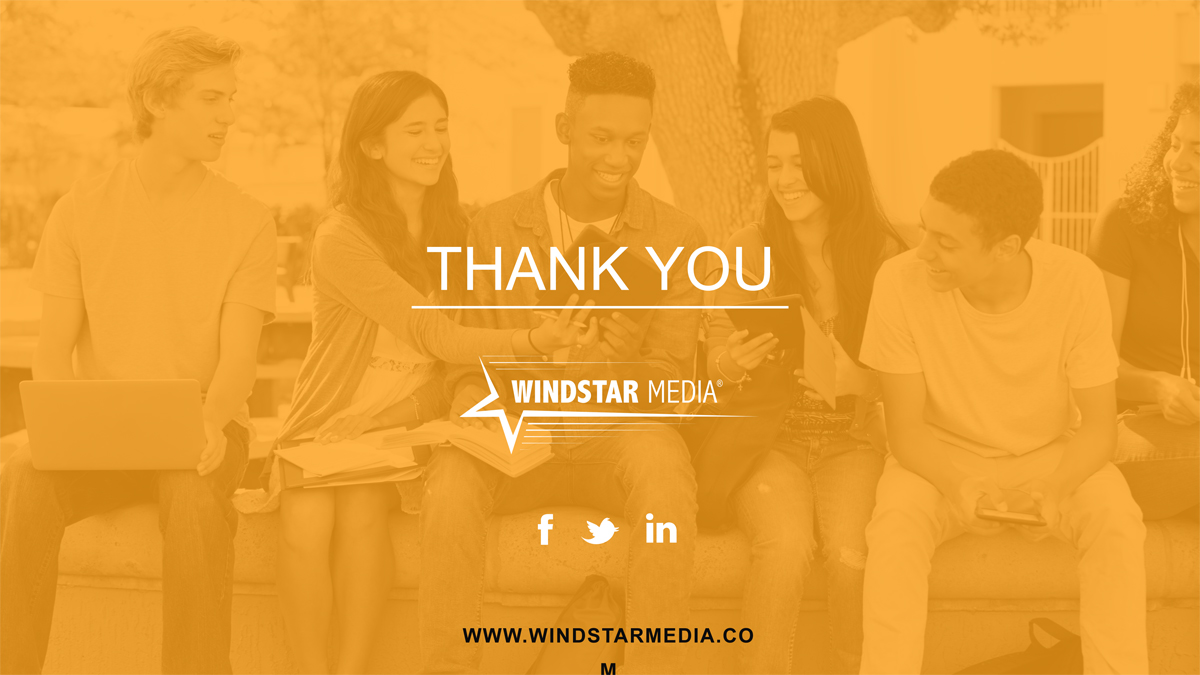 We’re proud of our history of successfully mitigating the impact of elections and political advertising. However, 2020 has brought us a new set of challenges by throwing a monkey wrench into the works. Fundraising combined with billionaire candidates has turbo-charged the buying power of candidates and third-party organizations. And the 2020 Presidential primary season has been pulled forward and compressed so much that we’re very likely to have the Democratic Party nominee in place by April.

The corporate parents of cable systems and broadcast stations consider political ad revenue to be critical to their profits. “Campaigns and PACs have raised more money at this point in the election than previous presidential elections,” said Stephen M. Marks, the Executive Vice President & Chief Operating Officer of Sinclair Broadcast Group during Sinclair’s 2Q 2019 earnings call.

His boss, Christopher S. Ripley, President, and Chief Executive Officer, echoed that during the 3Q 2019 presentation when he said that “data continues to point to 2020 as the biggest political ad spending year on record.” Media companies, like Sinclair, will ruthlessly manage their inventory to optimize their revenue.

Candidates for Federal and statewide offices get mandated protections not available for other advertising categories. That affects both cost and availability. Media buyers like WindStar Media® will have to negotiate optimal rates and clearance, which makes working with our media partners even more critical.

Consider California. The state’s last Presidential primary was on June 7, 2016, and this year’s primary date will be 90 days earlier, on March 3, 2020. And on this day, California will be just one of 14 States holding their Presidential primaries. Those 14 states account for 46.7 million, or 42% of the total U.S. Household population. Then, over the next two weeks, will come ten primaries in states having 29.7 million households.

The New York Times notes that if one dominant candidate sweeps the first weeks of March, “there will be immense pressure on the other candidates to exit the race.” Put another way; the 2020 Democratic Nominating pool contains 3,768 delegates. After early caucuses in Iowa and Nevada, the New Hampshire and South Carolina primaries, and then the March ‘Super Tuesday’s’ only 1,830 Democratic delegates – less than half – will remain.

Then comes the last big day, Tuesday, April 28 – what we’re calling ‘Big Tuesday’ – when New York and Pennsylvania, plus with Connecticut, Delaware, Maryland, and Rhode Island will decide 543 delegates. On April 29, 2/3 of convention delegates will be committed to their candidates. What happens if a candidate indeed has enough votes for the nomination?

There’s a consensus forming that Democratic and Republican Presidential media will transition from regional to national buys and focus on Cable news networks and Network news programs. Then, by July, the two parties will start investing in the battleground states.

The Cook Political Report considers 91 of the Congressional races to be ‘competitive,’ meaning that one party may have an advantage, but the other has a chance of winning. Cook also calls 14 of the Senate races competitive. These numbers include the 32 members of the U.S. House who resigned and are leaving open seats, as well as two open races for the Senate.

We’ve published a Primary Election Planning Guide for 2020, along with a detailed spreadsheet with election dates and political rate protection windows for all 210 Nielsen DMA’s. We’re happy to supply those upon request.

While the election calendar may have changed this year, media strategies will not. Historically, the most significant political advertising demand happens during the 22 days before election day. The last eight days are the most intense. Those patterns are consistent, whether it’s for a primary or a general election. A good rule-of-thumb this year; expect an 8% increase in total 30-second equivalent spot activity over 2018 and a 13% increase over 2016.

Our research and analysis of these trends have convinced us that significant impact upon National media avails (Cable, the Diginets, and Syndicated T.V.) won’t occur until Summer and Early Fall. That doesn’t apply to Cable News, which is already seeing early spending by Candidates and Political Action Committees.

To prepare for these challenges, WindStar Media® began working with clients to plan 2020 media campaigns much earlier than during previous planning cycles.

We’ve advised those clients to pull campaigns forward whenever possible, and to minimize schedules 30 days before the general election on November 3. Those campaigns incorporate Smart Choice Networks®, an WindStar Media® proprietary media asset, as a hedge against high audience CPM and low inventory availability. And campaigns for our local clients will ‘pulse’ their investments before, and immediately after the primary and general elections. To get all this done meant booking schedules during 2019 to hold critical inventory during 2020, for both Local and National clients. That way, the most productive networks, programs, and stations will keep on delivering leads and sales.

For more information about WindStar Media®, or a copy of our 2020 Primary Election Planning Calendar, please visit our website www.windstarmedia.com , or call

© 2020 WINDSTAR MEDIA®. ALL RIGHTS RESERVED. A SUBSIDIARY OF INTERMEDIA GROUP OF COMPANIES®.